AskBio will invest £3.4m alongside the grant to fund research into the manufacturing challenges associated with scaling gene therapies for widespread patient access, to further develop technologies to improve the safety and efficacy of current therapies, and to enable the treatment of genetic diseases with more complicated disease pathways that the industry is not yet able to address.

Gene therapy has the potential to treat a wide range of diseases including certain forms of muscular dystrophy, congestive heart failure and some diseases of the central nervous system but, at present, only two market-approved therapies are available. While the promise of these curative therapies is being demonstrated, significant barriers remain before gene therapies can become more broadly impactful.

The promise of AAV gene therapy comes with an obligation to solve the complicated issue of supplying viral-based gene therapies on a global scale. Currently, AAV manufacturing is highly complex and historically inefficient with a high cost that limits some patients’ ability to access treatment. Developing economical, scalable processes is therefore a priority.

Initial therapeutic targets have been focused on monogenetic diseases. However, with AskBio’s world-leading technology in gene control, there is potential to treat diseases with more prevalent and complicated disease pathways where precise management of gene expression is required for efficacy and safety.

This grant has been awarded to AskBio Europe to develop solutions to these industry-wide challenges. With the initial creation of 11 new, high-value jobs in Edinburgh, the AskBio team will further enhance its Pro10™ platform, a simplified, robust and cost-effective AAV manufacturing process that can be scaled and applied throughout the AskBio group. The grant will also advance development of the tool kit of inducible, repressible, tuneable and responsive expression cassettes to be adopted in the current clinical pipeline and new disease targets.

AskBio Europe (previously Synpromics) has been closely supported by Scottish Enterprise throughout the Company’s lifetime, through funding and advice that have helped it to develop its novel synthetic promoter technology platform based on proprietary data-driven design and bioinformatics and accelerate its growth.

Dr. David Venables, President of AskBio Europe, commented: “Scottish Enterprise has played a significant role in funding the development of our technology. This grant will allow us to undertake important research into the scalability of gene therapy manufacturing to help bring potentially transformative therapies to more patients.”

Innovation Minister, Ivan McKee, said: “This funding will support AskBio’s research into improving the treatment of genetic diseases, something that could be life-changing for patients. It will also create new and highly skilled job opportunities at the Company’s research and development facilities in Edinburgh. Scotland has a long and proud tradition of being at the forefront of scientific and technological advances, and it is important that that we continue to support global innovation and build Scotland’s world-leading life science sector.”

Nick Shields, Head of Business Support Services at Scottish Enterprise, said: “We have supported Synpromics, now AskBio Europe, for a number of years and have been pleased to witness its growth as well as the progress of its innovative technology towards helping patients worldwide. It is therefore great to see the company taking on this huge challenge on behalf of the global pharmaceutical industry, which could lead to the development of life-changing therapies for so many.”

These forward-looking statements involve risks and uncertainties, many of which are beyond AskBio’s control. Known risks include, among others: AskBio may not be able to execute on its business plans and goals, including meeting its expected or planned regulatory milestones and timelines, clinical development plans and bringing its product candidates to market, due to a variety of reasons, including the ongoing COVID-19 pandemic, possible limitations of company financial and other resources, manufacturing limitations that may not be anticipated or resolved in a timely manner, potential disagreements or other issues with our third-party collaborators and partners, and regulatory, court or agency feedback or decisions, such as feedback and decisions from the United States Food and Drug Administration or the United States Patent and Trademark Office. 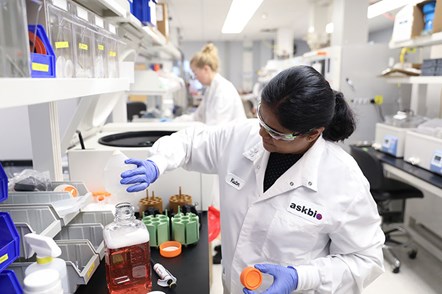