A total of 33 businesses with high-growth potential from across Scotland have benefited to the tune of just over £1 million after being named as winners at the Scottish EDGE Awards, which featured keynote speakers UK bioscience entrepreneur Professor Sir Christopher Evans, Alison Rose, CEO NatWest Group and Poonam Gupta OBE of PG Paper.

An additional £500,000 loan from Scottish Enterprise to Scottish EDGE will also allow the winners to access top-up loan funding to further boost their awards.

Today’s final brings the total pot of money awarded through Scottish EDGE to support early-stage, high-growth businesses to around £16 million in the 16 rounds now completed.

This year, Scottish EDGE received a record-breaking 327 applications. The finalists pitched to judges on 29 and 30 September in front of a virtual audience.

Scottish EDGE is the UK’s biggest funding competition for potential high-growth businesses. It supports Scotland’s most innovative, high-growth potential early stage businesses with up to £150,000 in cash. It also provides a business support package that includes mentoring, support and signposting to alternative finance. It is awarded as 50% grant and 50% loan which is paid back to help fellow entrepreneurs on their pathway to success.

Research commissioned by the Hunter Foundation has revealed that Scottish EDGE has helped generate 860 additional jobs and added around £70m in value to the Scottish economy over the past five years.

The independent economic impact report, by research firm EKOS, also found that every pound of public money invested in the fund has delivered a return of £7.30 to £8.50 of gross value added (GVA). The initiative has delivered more than £16m in loans and grants to 395 businesses since it was launched by Scottish Enterprise in 2013.

Scottish EDGE also promotes long-term sustainability of the funding pot through its pioneering ‘EDGE pledge’ inviting award winners to sign up to contribute a minimum of 1% from exit proceeds back into the fund.

Scottish EDGE is supported by the Hunter Foundation, Royal Bank of Scotland, the Scottish Government and Scottish Enterprise and has a vital role to play in the country’s economic growth.

Sir Tom Hunter said: “Early stage, high growth businesses will play a vital role in rebuilding our economy and driving employment opportunities. As such, Scottish EDGE offers pivotal help to them and it’s not just about the money, the support and peer-to-peer engagement is fundamental in contributing to business success. Given we had significant increases in high quality applicants I’m delighted Scottish Enterprise stepped up with an additional £0.5m of loan support enabling us to support far more businesses.

“To be clear if Scotland is to rebuild, SMEs are fundamental to our chances of succeeding and as such I think business and Government must come together to extend and accelerate support for them through the likes of Scottish EDGE and the Logan Review.”

“This is now our sixth year of working with Scottish EDGE and we’re extremely proud to be involved in an initiative that is central to the Royal Bank of Scotland’s purpose of helping the UK’s entrepreneurs succeed. Congratulations and good luck to all the finalists today.”

Linda Hanna, managing director of Scottish economic development at Scottish Enterprise, said: “Congratulations to all the winners in what was another high-calibre competition. We’re pleased to provide an additional £500,000 loan funding to help more of Scotland’s most promising and ambitious entrepreneurs grow their businesses, and look forward to engaging with them on their journeys. In these challenging times it is wonderful to see so many young companies, who have a pivotal role to play in Scotland’s economic recovery, continuing to pursue funds for growth.” 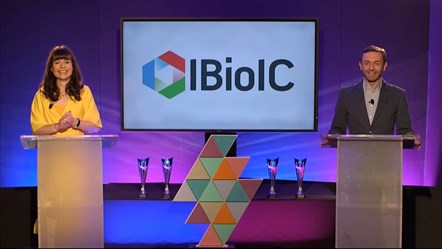