The Scottish Government’s Cabinet Secretary for Finance Derek McKay has welcomed Scotland’s first Innovation District at its official launch at the University of Strathclyde in Glasgow today (Friday 1 February).

The model – which is recognised for improving productivity, creating jobs and attracting inward investment in several cities around the globe – brings together researchers and high-growth firms with technology and creative start-ups, to work side-by-side in vibrant, walkable innovation communities.

Among the companies at the launch was leading technology firm, M Squared Lasers, which announced it is developing a new Quantum Centre within the District to enable 20 researchers to co-locate with the University of Strathclyde.

Welcoming the new District, Derek Mackay, Cabinet Secretary for Finance, Economy and Fair Work, said: “I am delighted to launch the Glasgow City Innovation District today. This is an exciting, ambitious project, one that could have significant economic and social impact for Glasgow, the surrounding areas and Scotland.

“This innovation district has the potential to transform the opportunities for businesses in the area, whilst attracting new investment and boosting Glasgow’s established reputation as a city of innovation, in which the University of Strathclyde plays a key role.”

Glasgow City Innovation District stretches from George Square to the edge of Glasgow Green and into the east end of the city, and runs from Glasgow Royal Infirmary south to the Clyde. Key sites within the District include the University of Strathclyde’s Technology & Innovation Centre and Inovo buildings, Glasgow City Council’s Tontine Building, and the Garment Factory.

In the past eight years alone, the University and partners have invested more than £100 million in the pioneering Technology & Innovation Centre and neighbouring Inovo building, enabling co-location of businesses and research groups.

To meet demand, plans are now in development for two additional buildings next to the Technology & Innovation Centre to double the space available for co-location of companies and world-class research groups. New clusters of activity in areas central to economic impact have already emerged, including Quantum, Space, 5G Communications, Health Technology, Industrial Informatics and FinTech.

At the same time, significant investment has been made in the creative sectors, including the creation of Tontine – a thriving business accelerator funded by Glasgow City Region City Deal, and Barras Art and Design in the East End.

The area is being transformed further through City Deal funding which will see the development of new transport initiatives, homes, hotels, commercial space and public realm in the Collegelands site adjacent to High Street.

Professor Sir Jim McDonald, Principal and Vice-Chancellor of the University of Strathclyde, said: “This part of the city is already home to world-leading education, research and innovation, but with Glasgow City Innovation District we are making the city a hotbed for the creation and co-production of new technologies and ideas.

“The city has the perfect elements to stimulate innovation – from partners with the ambition and drive to help businesses succeed; an entrepreneurial environment; and a rapidly-growing community of innovators.

“The University of Strathclyde is proud to sit at the heart of Glasgow City Innovation District and has a proven successful model of industrial engagement. The District will further accelerate the development of new technologies to help a wide range of sectors, as well informing a new generation of highly-skilled graduates who know what is required to help businesses thrive.

“Importantly, we are committed to creating jobs and opportunities for the people of Glasgow as we grow the business community to new heights.”

Graeme Malcolm, CEO and co-founder of M Squared, said: “The new developments in the area offer the perfect setting for our company to maintain its growth trajectory, particularly in the quantum field. Our team will greatly benefit from the exchange of talent, innovation and ideas we will gain access to.

“The Innovation District represents the heart of high-tech innovation in Glasgow and the UK more broadly. M Squared already holds a presence and working relationship with the University of Strathclyde – and having completed my PhD there – I understand first-hand how invaluable access and close proximity to the research facilities can be.

“We are an ambitious and high-growth business, and being located in the innovation district gives us an ideal opportunity to scale the company at pace, whilst collaborating with other regional innovators.”

Councillor Susan Aitken, Leader of Glasgow City Council, said: “Glasgow’s global reputation as an inventive, pioneering and productive city continues to flourish and the launch of the City Innovation District is a major milestone in our collective ambitions.

“We have fantastic assets in a highly-skilled workforce, internationally-recognised universities, distinctive and expanding science, technology, engineering and digital sectors, and a capacity for turning innovation into jobs.

“The Innovation District has excellent national and international connectivity, with proximity to airports, the rail and road network and set within a very attractive and liveable quarter of the city just a short walk from the creativity and vitality of our city centre.

“Today’s launch is the culmination of solid partnership working, a collaboration which will deliver hi-tech, innovation-driven growth to sustain the city’s economic prosperity for years to come.”

Professor Greg Clark, Chair of The Business of Cities, said: “Innovation Districts are helping cities world-wide to accelerate the transition to an advanced economy, and the jobs, trade and revenues that it brings.

“In Toronto, Singapore and Barcelona to name a few, such districts provide specialised locations that foster collaboration between business, science and institutions; they create visibility for talent, entrepreneurs and investors, and they provide brand and confidence to media, city and business leaders that the future is happening here and now in our city.”

Sandy Kennedy, Chief Executive of Entrepreneurial Scotland, said: “Glasgow has a proud tradition of innovation and enterprise, and I’m sure that this new initiative will be the catalyst for many future success stories.

“Through its City Innovation District, Glasgow offers the perfect mix of talent, experience, and ambition, to give the next generation of business visionaries the best support possible start. This is exactly the sort of collaborative approach which will enable us to work together to help make Scotland the most entrepreneurial society in the world.”

Stuart Patrick, Chief Executive of Glasgow Chamber of Commerce: “Innovation districts are growing as an economic development tool in US and European cities to exploit a trend for advanced technology industries moving into inner city districts, close to anchor academic and research institutions.”

Cities around the world are increasingly viewing the Innovation District model – with its emphasis on co-location and shared spaces – as an effective way of building the knowledge economy, boosting productivity and regenerating urban areas.

Neil Logan, Chief Executive Officer of Incremental Group, which recently moved into a new headquarters in The Garment Factory having grown its team from three people in 2015 to 120 today, said: “For us being in the Innovation District means great transport links, being close to customers and partners and having some fantastic universities on our doorstep.

“The District has a great mix of research, technology companies, design agencies and everything in between with affordable, quality space right in the middle of the Merchant City with its great social vibe.”

INNOVATION ORGANISATIONS IN THE DISTRICT:

The area has already attracted a dense community of innovative organisations, including: 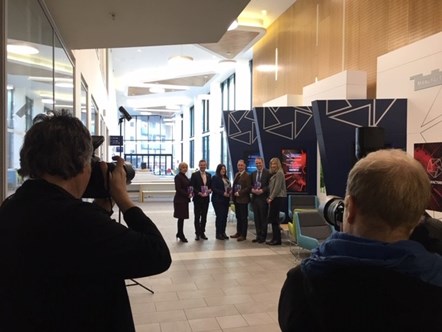