The visit was part of the Department for International Trade's inaugural JP-UK Tech Rocketship Awards for entrepreneurs in Japan.

Engagements for the delegation, which consisted of five fintech companies based in Japan, included a visit to the Bayes Centre, the University of Edinburgh’s innovation hub for Data Science and Artificial Intelligence, a tour of IT company Fujitsu’s office in Edinburgh and an overview of the Scottish fintech sector by FinTech Scotland during a tour of RBS’s Gogarburn HQ.

Speaking after the visit, Mr McKee said: “Scotland is globally recognised as an attractive and welcoming place for companies operating within financial services.

“This SDI programme allowed us to show our visitors from Japan the collaborative approach Scotland operates within the fintech sector, where our public institutions, academia and the private sector work together to support innovation and encourage business growth.

“This visit will further increase Scotland’s profile in the Far East and is another step towards our goal of being ranked among the world’s top five fintech cluster nations.”

The visit was the latest boost for Scotland’s international fintech profile.  At the end of January, the Scottish fintech sector became the first in the UK, and only the third in Europe, to receive formal accreditation as a cluster of excellence.

The European Secretariat for Cluster Analysis, which benchmarks economic clusters across Europe, looked at 36 indicators before making the award.

The Scottish cluster was founded as an independent industry organisation by the financial services sector, universities, the Scottish Government and Scottish Enterprise, and is overseen by FinTech Scotland.

Stephen Ingledew, CEO of FinTech Scotland, said: “The visit to Scotland by the fintech entrepreneurs from Japan was another example of the global collaboration with fintech centres around the world.

“Working with the SDI team, the fintech trade visit from Japan provided the opportunity to share why Scotland has been recognised as a fintech cluster centre of excellence, one of only three in Europe.”

Mr Ingledew added that FinTech Scotland had recently signed a collaboration agreement with both the Fintech Association of Japan and Fintech Tokyo, which will strengthen connections to develop innovation opportunities.

Takeshi Kito, Vice Chairman of the Fintech Association of Japan and CEO of Crowd Realty said: “I am very excited on agreeing the partnership and signing the MoU with Fintech Scotland.

“We look forward to working with the Fintech ecosystem of Scotland based in the second largest financial centre in the UK, which holds a number of large asset management firms.”

As part of its second anniversary celebrations last month, FinTech Scotland announced that the number of fintech SMEs based in the country had grown by more than 60% over the past year.

It is estimated that there are now 119 fintech SMEs operating in Scotland, coming from as far afield as Australia, the United States and Europe.

The fintech delegation from Japan visited Scotland on February 20-21.

The Scotland programme was organised by SDI and was part of a wider UK visit arranged by the Department for International Trade as part of its inaugural JP-UK Tech Rocketship Awards.  The awards are designed to connect Japan’s fast-rising tech stars with the UK’s financial ecosystem.

The companies on the delegation were: 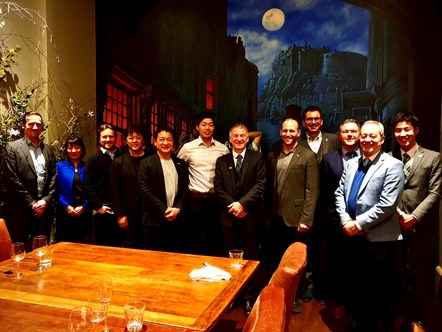