Smarter Grid Solutions (SGS), the Glasgow-based energy software firm, has been hailed as one of Scotland’s brightest stars in the fight against climate change by its long-term investors.

The company creates systems that allow solar panels, wind turbines, and other renewable energy devices to be connected to existing electricity distribution networks, keeping down the cost of expensive grid upgrades and managing on-site energy and carbon footprints.

Its technology also allows companies to take part in the emerging market for grid services, flexing their local energy assets up or down to help balance the grid, while selling excess power to the wider market.

Following the closure of its sale to Mitsubishi Electric Power Products Inc. (MEPPI), a subsidiary of Japanese industrial giant Mitsubishi Electric Corporation, SGS will be able to further scale up its contribution to tackling the climate emergency by helping more grid operators across the globe to connect more renewables to their networks and energy developers to add more clean energy assets to their fleets.

Generating electricity from renewable energy is not only essential for powering homes and businesses but will also be key to introducing low-carbon transport and heating, producing the clean energy that will be needed to charge electric vehicles and run electrically-powered heating.

SGS has already helped to connect more than 400MW of renewable capacity to networks in the five countries where it has live systems today, helping to save grid operators more than $300 million (£200m) in expensive infrastructure upgrades and avoiding the equivalent of two million tonnes of carbon dioxide emissions, the same as taking 165,000 fossil-fuelled vehicles off the road.

SGS was spun out from the University of Strathclyde in 2008, with Scottish Equity Partners (SEP) first investing in the company in 2011 through its Environmental Energies Fund.

Calum Paterson, managing partner at SEP said: “SGS is one of the brightest stars in Scotland’s fight against climate change and that role will now be enhanced by becoming part of Mitsubishi Electric.

“As the Intergovernmental Panel on Climate Change (IPCC) reminded us last week, the climate emergency is not a problem that can be solved by one company or one country on its own.

“Having the backing of a major global player like Mitsubishi Electric will give SGS greater access to markets around the world and the opportunity to bring its technology to a wider audience.

“We’re proud to have laid the foundations for SGS’s success, building on the great work done by the University of Strathclyde and helping the SGS team to grow a Scottish business with significant global potential.”

“Becoming part of Mitsubishi Electric will help SGS take its technology to the next level, helping more grid operators and energy asset operators in more countries to face the climate emergency by harnessing renewable energy.

“SGS has seen Scotland’s academic expertise paired with the country’s thriving investor eco-system to support the creation and development of a company that’s already making a difference on a global scale.”

Professor Sir Jim McDonald, principal and vice-chancellor of the University of Strathclyde, said: “Strathclyde is a long-standing leader in energy and power systems research. It has been a real pleasure to watch SGS and its excellent team go from strength to strength since spinning out from our Department of Electronic & Electrical Engineering in 2008, and to support the company via our Strathclyde Inspire Investment Fund in its funding rounds.

“SGS is one of the university’s most successful and innovative spin-outs and, through its software products, has transformed active network management of electricity grids across the UK and globally as the energy sector transitions to low-carbon power sources.

“We are excited by Mitsubishi Electric’s plans for the growth of the company in Glasgow. We look forward to collaborating with them on the further development of the company’s products and continuing our partnership with the SGS team.”

Graham Ault, co-founder and executive vice president at SGS, as well as the academic behind the research that became Smarter Grid Solutions, added: “The support we’ve received from our investors and the wider Scottish and UK business community over more than a decade has been humbling and very much appreciated.

“We’ve taken research findings from inside a university and transformed them into a real-world application that’s allowing more renewable energy devices to be connected to electricity grids across the UK, Europe, and North America, with our first system in Asia in the middle of delivery right now.

“Now, with the backing of Mitsubishi Electric, we’ll be able to take our work to the next level, expanding our operations to serve more customers in more countries and ultimately be an important contributor to the clean energy transition.

“This month’s IPCC report and the looming COP26 summit are focusing minds on the threat from climate change and we’re at the forefront of using technology to help meet that challenge. A lot of talented people within SGS, our partner organisations and our customers have contributed to our mission to get to this point - we are now looking to harness even more innovation and diverse abilities and contributions to address the enormous scale of the climate problem.” 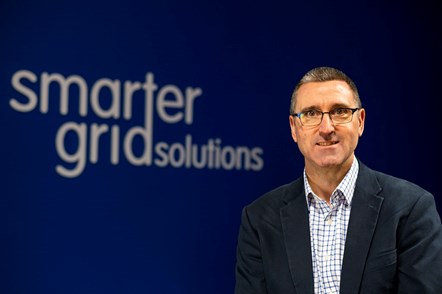