Scotland’s largest product design company Shore, based in Leith, has announced its transition to employee ownership, with over 30 members of staff given a stake in the business.

The company designs, engineers and develops drug delivery products, diagnostic devices and medical training products. It has a huge global customer base with over 80% of its customers in the USA, EU, Switzerland and Japan.  Its clients include some of the world’s biggest medical and pharmaceutical companies such as Johnson & Johnson, Amgen, Smith & Nephew, Eli Lilly and Ypsomed.

Shore was founded in 2003 by current owner and managing director Nick Foley.  Nick wanted to plan for his eventual exit by considering succession options early, therefore allowing for a smooth transition. He wanted a solution that would ensure the business remained independent and retained the company’s strong values and culture.

Whilst all options were considered, employee ownership was suggested by Scottish Enterprise, who put Nick in touch directly with Co-operative Development Scotland (CDS), and it quickly became the favoured route.

Commenting, founder Nick Foley said: “In due course I will want to exit the business, however having founded and developed it into a market leading company over the past 17 years, I didn’t want to sell to a third party and see the team’s hard work absorbed into another organisation with different values or a long-term strategy that might not match ours.

“We have developed a strong team ethic and a culture based on collaboration, support and respect. We’re not a group of individuals sharing an office – we are a team. Our people are hand-picked for the skills, creativity, experience and spirit they bring to our company, so it was important to me to give the company, the jobs and the brand the best chance of continued independent existence following my exit. The business should work for the employees, rather than the other way around, so employee ownership was the perfect fit for us.”

An Employee Ownership Trust has been formed and will hold a majority of the shares on behalf of the employees.  Nick will remain a significant shareholder in the business.

The move to employee ownership comes despite current economic turmoil as a result of the COVID-19 pandemic, with Nick viewing the transition as an effective way to bolster staff morale and maintain engagement and productivity as the team work from home.

Nick continued: “The staff are very excited about the transition, so it’s been a very positive experience and they’ve been really engaged in the process. Moving into employee ownership gives the opportunity for continued job security for all staff and enables them to have collective control of their future.

“Thankfully we’ve not been negatively affected by the impact of the virus; we’re very busy with both new and ongoing projects given our work in the medical and pharmaceutical industries and we’re very fortunate that the team is able to work from home.”

The transition to employee ownership was supported by Co-operative Development Scotland (CDS), with the process managed by Ownership Associates, legal services by Anderson Strathern, and accountancy services by Scholes.

Nick added:  “The whole process has been really smooth; essentially everyone is on the same side of the negotiating table which has made it much more straightforward than a typical trade sale.

“I firmly believe that the transfer to employee ownership is key for building a successful and long term sustainable business. It helps reinforce our existing internal culture and values whilst providing a fantastic service for our clients.”

Head of Co-operative Development Scotland, Clare Alexander, added: “Nick wanted a long term succession option which would enable him to gradually exit the business that he worked extremely hard to build, with the knowledge that the future is taken care of.  It will also help safeguard highly-skilled jobs and keep specialist skills alive whilst creating new opportunities. Employee ownership is a succession option that should be explored by businesses of all sizes and sectors.”

Statistics demonstrate that employee-owned businesses consistently outperform their non EO counterparts in terms of higher levels of profitability, increased productivity brought about by higher levels of engagement and enhanced employee wellbeing, as well as improved business resilience during times of economic crisis. Within Scotland, there are now around 110 employee-owned companies operating, with approximately 7,500 employee-owners generating a combined turnover of around £950 million. 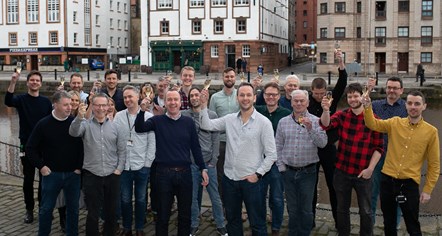