An international company specialising in the development of advanced antenna systems will land in Scotland following a grant from Scottish Enterprise.

The company, a UK subsidiary of Celestia Technologies Group headquartered in Holland, will be based initially at Heriot-Watt University while it identifies permanent premises in Scotland.  A total of 18 jobs will be created in Antenna technologies, Software Defined Radio, Radio Frequency Engineering and System Design.

Crucial to attracting CTG to Scotland was the country’s growing space sector, which is a key market for the company.  It has been estimated that this burgeoning sector could be worth £4 billion to the Scottish economy by 2030.

The R&D award announcement was made during a visit to CTG’s Heriot-Watt University base by the Scottish Government’s Cabinet Secretary for Economy, Fair Work and Culture Fiona Hyslop.

Speaking after the visit, Ms Hyslop said: “The global space sector is estimated to be worth £400 billion by 2030 and I am determined that Scotland will capitalise on the potential economic opportunities associated with this.  That is why the Scottish Government has identified space as a key priority.

“The sector in Scotland has seen strong growth over recent years, which is demonstrated through collaboration and investment such as Celestia Technologies, an international company that has decided to establish a permanent base in Scotland.

“I am determined that Scotland will lead the way in using satellite technologies and applications to make a significant contribution to combatting the climate emergency.”

CTG UK was established in 2017 to take advantage of opportunities in the emerging UK space sector.  The company specialises in phased-array, multi-beam, electronic scanning concepts for the advancement of state-of-the-art antenna systems used for tracking satellites, particularly useful for megaconstellations.

CTG will use the R&D grant to develop a satellite antenna for aircraft to link with a communication satellite for the in-flight broadband sector, which is experiencing rapid growth.  For this project, CTG intends to develop a flat panel antenna incorporating multi-beam and phased-array technology, and to test and validate a full prototype as well as setting the basis for ulterior production.

The proposed innovative design will be electronically steered and will offer improved communications and connectivity performance for a new generation of low and medium orbit satellites.

José Alonso, Chairman of CTG, said: “The grant will allow the company to establish a centre of competence in scanning antennas in Scotland, and have the confidence to continue its expansion in the UK in the supportive environment of the Scottish space sector, where skills and collaborative partners are in good supply.

“We are delighted to contribute to the knowledge-based jobs creation in the Edinburgh area and the economic growth of Scotland”.

Jonathan Wilson, Global Head of Inward Investment Services at Scottish Enterprise, added: “The decision by Celestia Technologies Group to deliver this innovative R&D project in Scotland is incredibly exciting and one which Scottish Enterprise is delighted to support.

“Scotland is developing a global reputation for our R&D capabilities and our growing technology cluster.  Our space sector was also of great appeal to Celestia Technologies Group, highlighting the growing importance of this industry as Scotland seeks to be Europe’s leading space nation.

“Our world-class workforce, combined with the ‘Team Scotland’ approach we’ve adopted between our public institutions, academia and the private sector, ensures that Scotland continues to punch above its weight when it comes to attracting foreign direct investment.  Competition for inward investment is fierce, but Scottish Enterprise will continue to actively promote our international leading sectors, such as our exciting space industry, as we bid to attract companies to Scotland.”

Scotland has a dynamic and growing space sector, which focuses on a number of high-tech, high skill and research and development intensive areas.

The space industry in Scotland has more than 130 organisations, with 7,600 employees at the cutting edge of their specialisms - backed by strong relationships with researchers in Scottish universities and research pools. 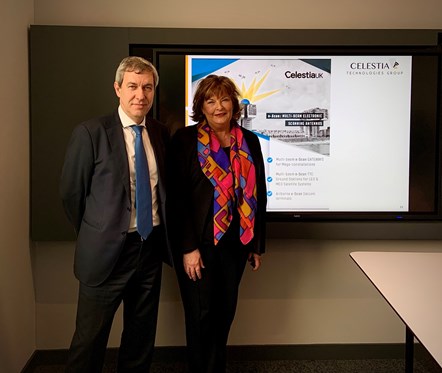