A Dundee tech firm with an online platform that helps convenience stores and traditional corner shops cash in on the growth in online grocery sales has raised a seven-figure sum to fund its expansion throughout the UK.

Snappy Shopper has raised the seed capital from Kelvin Capital, Mercia, the Scottish Investment Bank and the management team. The investment will support the company’s ambition to become the UK’s leading online platform for convenience stores and allow it to build its team with the creation of 21 jobs over the next year.

Snappy Shopper brings ‘convenience stores to consumers’ doors’ and can offer deliveries in under 60 minutes in many cases. It provides an easy and seamless way for independent stores and smaller chains to generate additional sales and engage with customers by offering promotions directly to their mobile phone while providing valuable insights into their buying behaviour.

The platform is already in use by a number of stores, which have reported  a marked growth in revenue. The average order value on the platform is £21.00 compared to an average spend of just £6.50 in store.

Snappy Shopper has been launched by the team behind one of Scotland’s leading web development companies, mtc, whose customers include BrewDog, Umbro, Innes & Gunn, and Macdonald Hotels & Resorts. Mike Callachan, the company’s co-founder and Chair, said: “Consumer behaviour is changing and customers now want delivery ‘on demand’. Snappy Shopper’s powerful app allows customers to order from their local convenience store and have their groceries at their door within 30 to 60 minutes. The platform provides a unique opportunity for convenience stores retailers to increase their market share and profits as well as giving detailed insights into customer buying patterns and behaviour.”

Marcus Henderson, Investment Director with Mercia, said: “Snappy Shopper allows convenience stores to cash in on the fast-growing market for online shopping. This investment will allow it to expand its live sites,  continue to innovate and  further develop its product and team.  With Mercia’s experience backing early-stage tech firms, we are well placed to work with our partners and support the team in their ambition to make it the UK’s leading retail platform of its type.”

Kerry Sharp, Director, Scottish Investment Bank, said: “Snappy Shopper has channelled years of e-commerce and development experience into the creation of a platform that could completely transform community-based retailers’ interactions with existing and potential customers. We hope our support will help the company tap into the significant market opportunity that exists and grow its business exponentially over the next few years.”

John McNicol, Director at Kelvin Capital, added: “Online shopping and food ordering is undoubtedly on the rise and the team at Snappy Shopper have identified a huge gap in the market by offering consumers the convenience of local grocery shopping, directly to their door, much quicker than a large supermarket can.  Kelvin Capital are delighted to be investing alongside Mercia in such a fast-growing marketplace.” 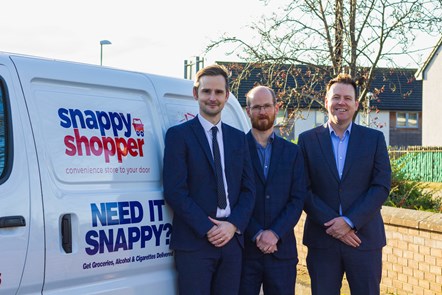