The Edinburgh-based business has closed its latest funding round, to which the Scottish Investment Bank (SIB) has committed £1m on behalf of the Scottish Government via the latter’s Energy Investment Fund (EIF).

SME undertook initial testing of the PLAT-I system near Connel, Argyll and Bute in 2018. The device was then transported to Grand Passage, Nova Scotia, where it generated power for the first time in February this year.

There it is continuing SME’s testing and demonstration programme in preparation for the build out of a larger project at the Fundy Ocean Research Centre for Energy (FORCE) located in the Minas Passage of the Bay of Fundy.

Jason Hayman, Managing Director, SME said: “It is fantastic, and a great testament to the team for all their hard work to close this funding round. Securing new investment from the Scottish Investment Bank and commitment from SCHOTTEL for our work in Nova Scotia will enable us to take a significant step forward on our renewable energy journey.”

SIB Director Kerry Sharp said: “SME has repeatedly proved its resourcefulness, culminating in the successful testing of its innovative PLAT-I platform and generation of first power. We’ve supported the company every step of the way since it relocated to Scotland in 2016 and have underlined our continued backing by contributing to its latest fund-raise.

“This investment could ultimately see SME further its commercial activity, placing the company at the forefront of the development of tidal energy technologies and further cementing Scotland’s position as a leading player in the global transition to a low-carbon economy.”

SME will be commercialising the tidal turbine technology developed by SCHOTTEL, in-conjunction with its platform and anchoring solutions, to offer an integrated solution to the market. SME will also be continuing the development of projects in Nova Scotia, Canada that will be used to prove up its products, including the 5MW berth at the Fundy Ocean Research Centre for Energy (FORCE) that was awarded to SCHOTTEL in 2014.

SME has bought its technology to Canada with the installation of the first ground-breaking 280kW PLAT-I platform at Grand Passage in Digby County in September 2018. The platform had previously been tested in Scotland and will form part of SME’s first commercial array in Nova Scotia with testing continuing throughout 2019.

About the Energy Investment Fund

Building on the success of its predecessor, the Renewable Energy Investment Fund, EIF provides flexible investment and debt funding for energy projects in Scotland that will facilitate, catalyse and accelerate Scotland’s transition to a low carbon economy.

With £20 million of funding available for 2018/19 to provide commercially priced loans and equity investments, EIF’s key focus areas are providing finance to increase community ownership of energy projects in Scotland or to accelerate the development of commercial low carbon energy projects in Scotland. On a case-by-case basis, EIF will also consider follow on commercial investment into companies within the existing REIF portfolio.

About the Scottish Investment Bank

SIB’s activities support Scotland’s SME funding market to ensure businesses with growth and export potential have adequate access to growth capital and loan funding. SIB manages a suite of co- investment funds including the Scottish Co-investment Fund and the Scottish Venture Fund, and the Energy Investment Fund on behalf of the Scottish Government.

SIB is also an investor in Epidarex Capital’s Life Sciences Fund and is a participant in the Scottish-European Growth Co-Investment Programme with funding secured from Scottish Government’s Scottish Growth Scheme alongside the European Investment Fund.

SCHOTTEL HYDRO manufactures the SCHOTTEL Instream Turbine (SIT) which is used in all SME projects to generate clean energy from tidal and river currents. The SIT features a modular system including a passive-adaptive fixed pitch rotor, a high power-weight ratio drivetrain and a power conversion system on board. Rotor blades are available as 4m and 6.3m diameter, depending on the flow velocity at the chosen deployment site.

A number of SITs have been delivered to projects in Europe, South East Asia and North America. SCHOTTEL HYDRO is located in Spay, Germany, along with the headquarters of its parent company SCHOTTEL GmbH which has a large global network of sales and service locations ensuring customer service worldwide 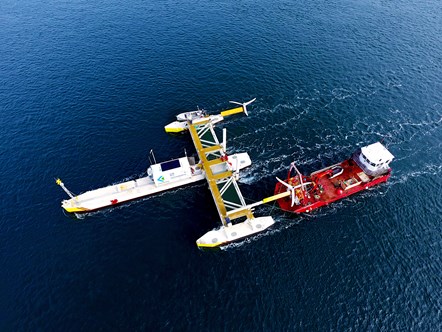